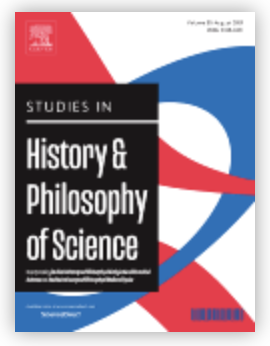 CfP: Robots and Living Organisms: New Historical and Philosophical Perspectives (Studies in History and Philosophy of Science)
https://www.journals.elsevier.com/studies-in-history-and-philosophy-of-science/call-for-papers/call-for-papers-robots-and-living-organisms-new-historical-and-philosophical-perspectives
GUEST EDITORS
* Dr. Marco Tamborini
Technische Universität Darmstadt
Department of Philosophy
Karolinenplatz 5, 64289 Darmstadt Germany
marco.tamborini@tu-darmstadt.de
https://scholar.google.com/citations?user=rCLRkyYAAAAJ
* Dr. Edoardo Datteri
University of Milano-Bicocca
Department of Human Sciences for Education, RobotiCSS Lab
Piazza dell’Ateneo Nuovo 1, 20126 Milano
edoardo.datteri@unimib.it
https://scholar.google.it/citations?user=wGwyuFkAAAAJ&hl=en
AIM AND SCOPE
The analysis and construction of automata – more recently called robots – has often stimulated, inspired, and influenced the development of theories on the morphology and behaviour of living systems. At least since the 17th century, observation of hydraulic machines, clocks, automated theatrical representations, and humanoid automata often prompted adoption of mechanistic conceptions of life and animal behaviour. Robots have been used as models of sensory-motor and information processing mechanisms in 20th-century Cybernetics and cognitive science. More recently, in so-called interactive biorobotics, the study of animal-robot interaction dynamics offers insights into the mechanisms of social behaviour and cognition.
The aim of this special issue is to gather articles centred on the following questions.
* What epistemic roles have automata played, throughout history, in the study of animal (possibly, human) behaviour, morphology, cognition?
* Is there any trace of genuine experimental use of automata for theorizing on the behaviour and cognition of animals and humans before the 20th century?
* What conceptions of ‘machine’ and ‘living system’ lay behind early and contemporary machine-supported studies on living system behaviour?
* What kind of practices have been adopted throughout history to design and build automata and to validate knowledge produced through them? How did these practices change over time?
* What roles can a reflection on the epistemic uses of automata play in the broader discussion on the material turn in science studies and on the technoscientific status of 21st-century science?
* What broader economic and political interests have been at stake in designing and using bio-robots? How do these interests enable or constrain broader epistemic agendas?
* What roles so-called invisible technicians have played in producing knowledge through automata?
* How were automata produced and used in non-Western societies?
* How has the relationship between engineering and biological science changed over time?
DEADLINES
* January 31st, 2022: submission of a long abstract of the article to the Guest Editors (ca. 1500 words)
* April 1st, 2022: submission of a first draft of the article to the Guest Editors (marco.tamborini@tu-darmstadt.de, edoardo.datteri@unimib.it).
* May 31st, 2022: submission of the article to the Journal, using the “Submit your paper” button at page https://www.journals.elsevier.com/studies-in-history-and-philosophy-of-science. We recommend that you select the title of the special issue during the submission process.
Instructions for submissions and author guidelines can be obtained from the “Guide for Authors” page on the journal website: https://www.elsevier.com/journals/studies-in-history-and-philosophy-of-science/0039-3681/guide-for-authors
September 20, 2021/by Christian J. Feldbacher-Escamilla
https://www.wissphil.de/wp-content/uploads/Studies-in-History-and-Philosophy-of-Science.png 346 270 Christian J. Feldbacher-Escamilla http://www.wissphil.de/wp-content/uploads/GWP-logo.png Christian J. Feldbacher-Escamilla2021-09-20 07:47:192022-02-06 22:15:50CfP: Robots and Living Organisms: New Historical and Philosophical Perspectives (Studies in History and Philosophy of Science, Deadline: January 31, 2022)
CfR: 2nd ESHS Early Career Scholars Conference (Online)